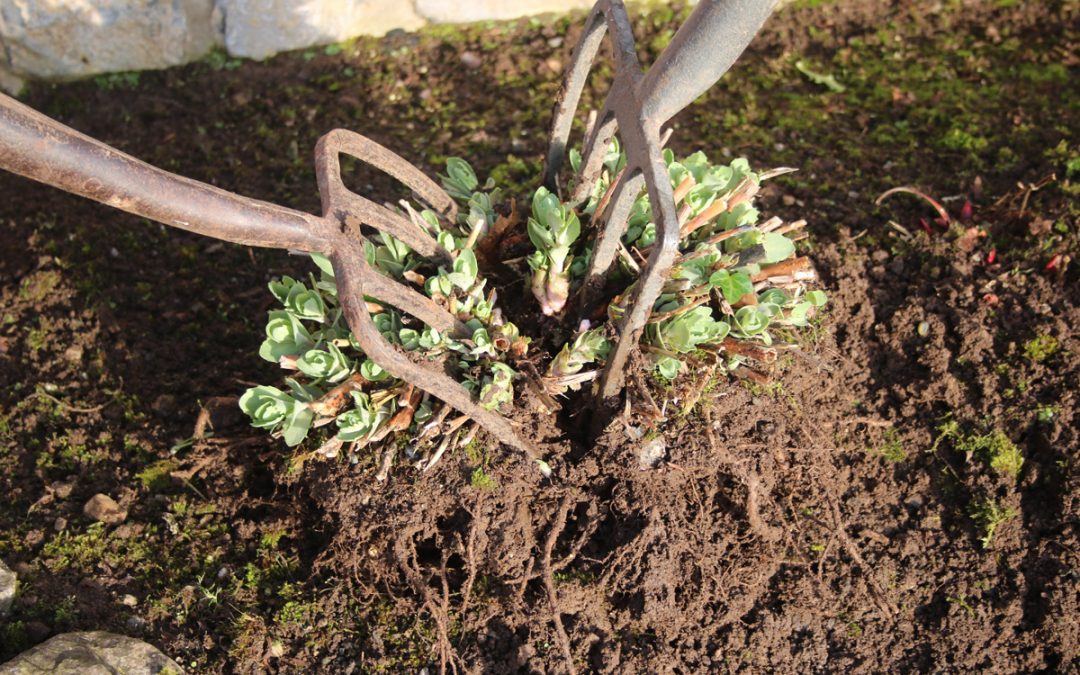 Most herbaceous perennials benefit from lifting and dividing them every two to three years to maintain health and vigour. It also offers the opportunity to multiply your plants, perhaps for planting up a new garden bed or to create a mass planting for added impact or to share with friends.

We divide most perennials in spring when there is less foliage for the plant to support and the soil is moist. Dividing perennials in spring gives the new transplants time to become established over the course of the entire growing season. Perennials can also be divided in autumn, if it is done early enough to allow adequate time for roots to establish before winter. A rule of thumb for dividing perennials is, if it flowers between early spring and mid-June, divide it in early autumn.  Perennials that flower after mid-June are best divided in the spring, just as the new foliage emerges.

Plants to divide in spring include sedum, hemerocallis (day lilies), hosta, hardy geraniums, heleniums ornamental grasses and crocosmia. Perennials that can be divided in autumn include brunnera, epimedium and lily-of-the-valley. Some plants, especially those with tap roots, don’t need dividing and resent having their roots disturbed. These include acanthus, bleeding heart, sea holly and peony.

For beginning gardeners, the first time you divide perennials you may feel nervous and unsure of what you’re doing.  Have no fear!  Most perennials are very resilient, recover quickly and will be all the better for the experience.

Signs that a perennial plant is getting overcrowded and needs to be divided include smaller leaves and fewer, smaller flowers. Often, you’ll see a doughnut, a dead spot in the middle, and active growth around the outside.

In such cases, simply dig up the entire clump, once your plant shows signs of growth in the spring (3-5cm of new shoots is fine), and carefully divide the crown and root ball into two or more sections, depending on the size of the clump. Sometimes the roots are easy to break apart with your hands, while we often use a kitchen steak knife or garden spade or even an axe may be required for plants with woody crowns. Each division should have both green above-ground shoots as well as roots below.

For plants with strong roots like hemerocallis and hostas, insert two garden forks into the crown, back to back, as shown. Use these as levers to break the root mass into two sections. Further sub-divisions can then take place. Replant your divisions as soon as possible, making sure that the roots don’t dry out. In general, divisions should be planted at the same depth as the original plant, leaving enough space between plants to develop. Ensure that roots are evenly spread out in the planting hole before gently firming the plant in. Water the base of each division immediately after planting and keep the plants well watered while they settle in, especially during dry spells.

If you have loads of extra divisions, consider potting up a few of them – they will make terrific and inexpensive gifts when visiting other gardeners.